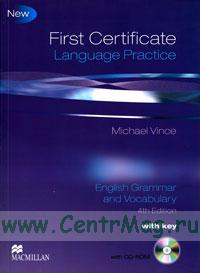 Развернуть ▼
First Certificate Language Practice is the reference and practice book for students at FCE / B2 level. Now in full colour, this new edition retains all the original features which make the Language Practice series so popular, including clear grammar explanations, plenty of practice and regular consolidation units. Themed vocabulary units contextualize essential FCE level words and phrases, offering a variety of exercise types to help students understand and use the new vocabulary. The accompanying CD-ROM includes extra practice for all the units covered in the book, with exercises based on international computer-based test types.

The test generator includes around 1,000 items to test students on all areas covered by the book.
Содержание

Present simple, present continuous Units 1-4
Indirect speech
With and without tense changes, questions, commands and requests, reporting verbs, paraphrase
Conditionals
Real / likely situations (first conditional) with if, unless, provided, as long as, the imperative, should Unreal / imaginary situations (second conditional) with if, were, were to
Unreal / imaginary past situations (third conditional) with if, mixed conditions Other sentences
Wishes and related forms
Wishes about the present and past, wishes about the future with could and have to, wishes with would, wishes with if only, it's time, I'd rather, suppose, imagine
Passives
Transitive and intransitive verbs, focus on important information, reporting verbs, have I get something done, needs doing, verbs and prepositions, other problems

Units 5-8 Relative clauses
Subject and object clauses, combining sentences, defining and non-defining clauses, omitting the relative pronoun which, who, that, whom, whose
Prepositions
Movement, position and place, problems of use, prepositions without an object, prepositions with more than one word, prepositional phrases
Purpose, result and contrast
Purpose: so that, infinitive of purpose, in order to, so as to, for Result: so I such a, so many I much I few I little, too I not enough + to Contrast: although, though, even though, while, whereas, however, nevertheless, despite, in spite of
Time expressions
Present time: nowadays, these days
Future time: in, calendar references, at the end, in the end, at last, presently
Past time: once, periods of the day, calendar references, in those days, at that time, after, later, afterwards, other problems

Units 9-12
Modal verbs: present and future
Ability: can, he able to
Certainty and uncertainty: must, can't, may, might, could, should, ought to, he hound to
Obligation: must, have to, mustn't, don't have to, should, ought to, had better, is I are to
Modal verbs: past
Ability: could, was able to
Certainty and uncertainty: must have, can't have, may have, might have, could have, was I were to have Obligation: had to, should have, ought to have, needn't have, didn't need to
Pronunciation and writing, indirect speech Functions 1
Asking for and giving advice, agreeing and disagreeing, apologizing, complaining, ending a conversation, asking for and giving directions, greeting, asking how someone is, asking for information, introducing yourself and others, inviting, accepting and declining invitations, offering something, offering to do something
Functions 2
Things to say on special occasions or at special moments, asking for and giving an opinion, pausing to think, asking for permission, giving and refusing permission, expressing preferences, promising, reassuring, recommending, refusing to do something, making and responding to a request, suggesting, thanking

Verb / Adjective + preposition < Units 21-24
Inversion and question tags
Inversion after negative adverbs, inversion to emphasize an adverb, question tags
Linking words and text organizers
Reason: because, as, since, because of, on account of, due to, owing to
Text organizers: sequencing, adding, giving opinions, giving examples, showing a result, making a contrast, summarizing
Pronouns
It and there, it and adjectives, one, someone, everyone, anyone, somewhere, what as a pronoun, whatever, whoever, wherever, whenever, why ever, however, reflexive pronouns, possessives: parts of the body
Spelling and pronunciation
Spelling problems, spelling and pronunciation
Units 25-28