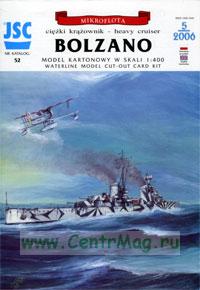 Развернуть ▼
The Bolzano was the last of Italian heavy cruisers built according to Washington Treaty regulations. She was considered to be an improved Trento class and like on that class much of her armour was sacrificed in order to increase the maximal speed. She was laid down in Ansaldo yard in Genoa on 11 June 1930, launched on 31 August 1932 and completed on 19 August 1933.

Bolzano entered war on 10 June 1940 as a part of 3rd Cruiser Division, together with Trento and Trieste, when - together with other Italian warships - she covered Italian minelayers operating in
the area of Sicily and Pantellaria, down to African coast. On the next day she left Messina; together with Pola, Trento and two destroyers flotillas she just missed British Mediterranean Fleet that left Alexandria to intercept Italian shipping off the Libyan coast.

In early July 1940 Bolzano was part of an escort of Italian convoy from Naples to Benghazi. On 9 July she took part in the battle of Stilo when Italian ships clashed with a British escort of convoy from Malta to Alexandria. Bolzano was slightly damaged by British cruisers. Again she went to sea on 28 September 1940 when Italian aircraft reported British fleet attempting to reinforce Malta. Although the Italians had 4 battleships and 11 cruisers against British 2 battleships and 3 cruisers accompanied by an aircraft carrier the Italian ships returned unmolested. On 13 October Bolzano left together with 3rd Division to assist Italian destroyers damaged by British cruisers, but their intervention proved to be late.

On 27 November Italian Navy tried to intercept British warships screening a convoy from Gibraltar to Malta; 2 Italian battleships and 6 cruisers met 2 British battleships, 4 cruisers and an aircraft carrier off Cape Spartivento. A British cruiser and Italian destroyer were damaged in the battle.

On 8 February 1941 Italians (including Bolzano) again tried to intercept British warships that attacked Genoa and Livomo. They were unable to meet the enemy due to lack of cooperation between the navy and air force. On the other hand the Naples - Tripoli convoy, escorted by Bolzano and 3rd Cruiser Division, went through unmolested.

By the end of March 1941 Italians tried cut the British supply lines to Greece. On 26 March battleship Vittorio Veneto left harbour, accompanied by 8 cruisers and 14 destroyers; the operation was to be covered from air by German Fliegerkorps X. Italian radio traffic was intercepted by British intelligence and in the battle off Matapan the British Mediterranean Fleet managed to sink the cruisers of Italian 1st Division (Pola, Zara and Fiume) and 2 destroyers. None of British ships was even damaged; also Bolzano managed to return without damages. At the end of April 1941 Bolzano (together with cruisers Trieste and Eugenio di Savoia) again escorted convoys to North Africa and back. Bristish air and submarine attacks concentrated on transports and Italian cruisers missed the fight. Other convoys escorted by Bolzano took place on 24 May and 16-18 July.

In the second half of August 1941 Royal Navy decided to mine the approaches to Livorno. On 22 August Italian intelligence reported British warships leaving Gibraltar. 2 Italian battleships and 7 cruisers (including Bolzano) were unable to find them and on 25 August Italians had to return. On that day Bolzano was torpedoed off Messina by British submarine Triumph. The necessary repairs lasted whole year.

In mid-August 1942 Bolzano (with 5 other cruisers) participated in Italian attack against British "Pedestal" convoy to Malta. As no air cover was provided the Italian ships turned back; again the ships met the British submarine on the approaches to Messina: a torpedo salvo fired by Unbroken hit Muzio Attendolo and Bolzano. The latter had to be beached to prevent her loss.