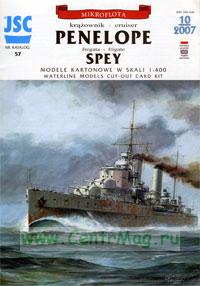 At the beginning of 1930s British Royal Navy decided to built a number of small cruisers. Their mission was to act as fleet scouts and to protect trade routes. The new cruisers were to be a smaller version of Amphion class and their small size made possible to increase the number of ships in tonnage limit allocated to Royal Navy.
Penelope - third ship of the class was ordered on 8 March 1934 in Harland & Wolff yard in Belfast. She was laid down on 30 May 1934, launched on 15 October 1935 and completed on 13 November 1936. Compared with earlier ships of the class her AA armament was increased as double 4" mountings were installed in place of singles.

Upon completion Penelope entered service in Home Fleet, in 3. Cruiser Squadron. By the end of 1936 she was transferred to the Mediterranean, together with whole Squadron and until the end of 1939 she operated in the eastern part of Mediterranean. In January 1940 she returned to UK via Gibraltar and in February joined 2. Cruiser Squadron of Home Fleet. Together with other ships of the class she took part in Norwegian campaign. On 8 April she joined

Repulse with destroyers to search for Glowworm which in meantime was sunk by Admiral Hipper. On 10 April she joined the 2. Destroyer Flotilla off Narvik, but the battle was already over. On 11 April she entered Vestfjord to destroyer enemy transports reported in Bodo, but she ran aground off Narvik and had to towed away with considerable damage.

In mid-September 1941 Penelope arrived in Iceland. On 5 October she left with King George V, Victorious and three destroyers for Norwegian coast. On 9 October Albacores from Victorious attacked ships off Bodo and Vestfjord and sank two of them.
In mid-October 1941 Penelope joined 15. CS in Gibraltar. Four days later together with Aurora, Lance and Lively formed Force К which operated from Malta against enemy shipping. Penelope took part in ten sorties; on 9 November she participated in massacre of Italian convoy in the Straits of Messina, when two destroyers and seven transports were sunk by British. On 23 Novemeber she sank two Italian transports off Crete, while on 17 December she participated in first battle of Sirte.

On 19 December 1941 Force К left in search of a convoy reported off Tripoli. By midnight the British ran on a minefield laid in July by Italian destroyers NW of Tripoli. Of the cruisers the Neptune sank, while Aurora was heavily damaged. Penelope was the only one with paravanes spread out and her damages were slight. She returned to Malta and during repairs, which lasted until 3 January 1942, further four single 20 mm were installed.

Until mid-February 1942 Penelope three times left Malta to meet arriving British convoys. The fourth was on 22 March 1942 when she joined convoy MW. 10 from Alexandria just in time to take part in the second battle of Sirte, when Rear Admiral Vian successfully led five small cruisers and eleven destroyers defending the convoy against Italian battleship Littorio, three cruisers and ten destroyers. However most of convoy was destroyed by aircraft and only 20% of cargo managed to reach Malta. Penelope was damaged, too - both from bombs and from storm. Only most provisional repairs could be carried out in the dock, as the bombers were frequent over that area. Therefore after few days in dry dock she was sent (via Gibraltar) to USA. During refit, which lasted until end of August she was fitted with four single 20 mm Oerlikons and 273 radar.

On 17 September Penelope left Norfolk and arrived in Portsmouth on 1 October. The repairs were continued in Bristish yards and only in January 1943 she joined Force Q in Bone.
In summer 1943 Penelope took part in Allied landing operations in Mediterranean: off Pantellaria in June and off Italian coast from July to September.
On 7 October 1943 Penelope took part in a raid in Aegean, when the British forces were attacked by German aircraft in Scarpanto Straits and Penelope was damaged. She was refitted in Alexandria and later in Gibraltar. She left Gibraltar on 27 December 1943 searching - together with Ariadne - for the German blockade runner Alsterufer reported in Bay of Biscay. However the German ship was sunk by a Czech Wellington.

In January 1944 Penelope joined the ships operating off Anzio. There she supported the attackers with her gunfire until 18 February 1944. On that day, when returning to Naples, she was sighted by German U410. She was hit by two torpedoes and sank 35 miles west of Naples; 250 of her complement were lost, while other 250 were saved. She was the last British cruiser lost in Second World War.

German U-boat offensive in the first years of Second World War coupled with lack of proper escorts led to huge Allied shipping losses. The British "Flower" class corvettes, designed before the war as a stop-gap measure, proved too small and too slow for Northern Atlantic. As soon as necessary experience was gained new, larger and far more effective escort ships of ,.River" class were designed. 84 ships of that class were built in British and Canadian yards, followed by 43 more of "Improved River" class from Canadian and 12 from Autra-lian yards. The US Navy commissioned further 75 ships of similar "Asheville" and "Tacoma" classes, while another 21 US-built ships of the latter class were loaned to Royal Navy. One of the "River" class frigates was Spey ordered in 1940 from Smith's Docks. She was launched on 18 December 1941 and completed on 19 May 1942 with pennant number K.246. After the work up she joined 1st Support Group employed on convoy routes in the Western Approaches.

On 16 June 1942 she sped together with destroyers Beagle and Wild Swan and Polish "Hunt" class destroyer Krakowiak to reinforce the escort of HG.84 convoy proceeding from Gibraltar. By that time five ships were already lost during constant attacks of German U-boats; after arrival of the Group Wild Swan was lost due to German air attacks.

Another action took place on 11 July 1942 during the fight for OS.338 convoy bound from West Africa when Spey together with sloop Pelican and Free French destroyer Leopard destroyed German U136 in postion 33°30N-22°52W.

In May 1943 Spey took part in a convoy battle that began south of Greenland on 28 April 1943 when German wolf packs attacked the 0NS.5 convoy. Driven away by the escort they took positions on the expected route of SCI28 convoy; the latter managed to evade to U-boats. Therefore the Germans reorganized and a huge pack comprising 41 boats found the ONS.5 - by that time there were 31 ships screened by seven escorts. Another pair of escorts just left to refuel at St.John's, while last two took care of nine stragglers. U-boats managed to sink 12 ships at a cost of two submarines damaged until the convoy entered thick fog during night on 6 May. Tn low visibility the convoy was hidden from the Germans while the U-boats could be easily seen on radars. In two hours the British managed to sink three U-boats and damaged further four. In the morning of 6 May 1st Support Group joined from St.John's, comprising Pelican, Sennen, Jed, Wear and Spey. They managed to sink one U-boat and damage another two, including U654 damaged by Spey with depth charges and artillery. Before the noon the U-boats withdrew. British succcess was measured not only by the number of U-boats destroyed; six other convoys (ON. 180, ON. 181, ON. 182, 0NS.6, HX.235 and HX.236) safely reached Canada with no losses while the U-boats were engaged against 0NS.5.

Another convoy battle took place when a U-boat pack attacked the SCI30 convoy. Again the 1st Support Group was sent to reinforce the escort. Arriving on 12 May 1943 they managed only to drive away the last U-boats that strove to maintain contact with the convoy. Spey together with Jed briefly engaged U143, slightly damaging her.

In summer 1943 the Г' Support Group (including Spey) took part in operation "Percussion" when no less than 170 Coastal Command aircraft and 20 warships tried to close the U-boat routes from French bases to Atlantic. There by the end of August Spey damaged U342 returning from the patrol. Later the l.SG escorted convoys, including KMF.24 which sailed from Londonderry to Algiers between 16 and 24 September 1943, with no losses.

In February 1944 Spey was already in 10th Support Group; together with other ships of the Group (Rother, Findhorn and Lossie) she took part in another convoy battle. It began on 6 February when German air recconaisance sighted SL.147/MKS.38 convoy escorted by B3 Escort Group (9 ships) reinforced by 2nd Support Group (2 escort carriers and 4 frigates). 24 U-boats of Igiel group were directed there. On 10 February another convoys entered the area: HX.227 with EG.B1 and 6.SG and ON.223 with EG.B7, 2 escort carriers and 10.SG (4 frigates, including Spey) and OS.67/ KMS.41 (with escort carrier). Germans lost 6 U-boats and the Allies - two aircraft.

The second stage of the battle began on 16 February, when Escort Groups B2 and B7 together with 2nd and 10th Support Groups were directed to HX.278, ON.224 i ONS.29 convoys attacked by Hai group comprising 21 U-boats. During a bitter night skirmish on 18/19 February Spey depth charged and sunk U406 in position 48°23N-23°36W. On the next day the battle went on and in position 48°51N/22°44W Spey sank another U-boat - U386. The Allies lost frigate Woodpecker and destroyer Warwick.

Later Spey went to Far East. In January 1945 she covered Allied landing operations on Burmese coast, on Ramree islands (operation "Matador", 16 January 1945) and Cheduba (operation "San-key", 24 January 1945). Her last wartime action took place between 24 February and 3 March 1945 when together with six other escorts she screened escort carriers Empress and Ameer and cruiser Kenya during a sweep in Andaman Sea (operation "Stacey").

After the end of war Spey followed other River class frigates into reserve; in the meantime her pennant number was changed to F 246. In 1948 she was transferred to Egypt together with Usk and Nith. Renamed as Rashid she survived until mid seventies, when she was converted to a submarine depot. During the conversion she was fitted with a large deckhouse aft. Although deleted in 1990 she was still extant in 1995. 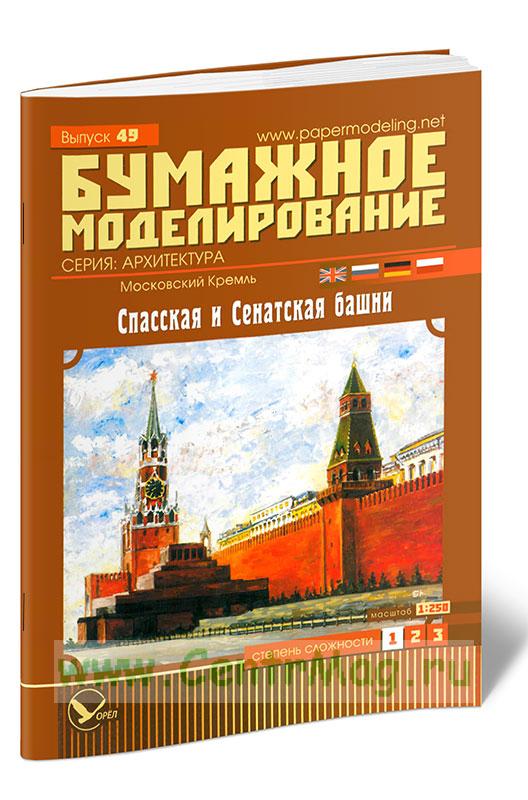